Bangladesh Football Association in partnership with BBBCO is currently running a girls project in Bromley-by-Bow area. Our aim is to get all the local girls from Tower Hamlets to play football.  We will deliver 1 weekly football coaching/training sessions for 2 hours for 20-25 girls aged 13-19 years old.  The project will be running for 15 weeks starting Friday 28th May 2010. The girls will learn basic techniques and skills in football. 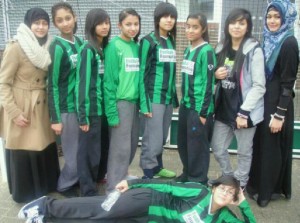 Four girls teams from across London took part in a 5-a-side football tournament on Saturday morning at Mulberry Sports Complex and battled it out in a mini tournament, comprising of six group stage game plus a final to establish the winner in a closely fought competition.

Teams from Croydon, Bromley-by-Bow Girls and Central Foundation Girls School arrived keen to battle it out for the coveted trophy, and apart from an early 7-1 victory for Croydon Girls, most games were hotly contested.  This victory put Croydon Girls immediately at the top of the mini league, a position they were to prove untouchable from, as they ensured three straight wins on route to the final.  Bromley-by-Bow were the team to run closest to upsetting this though, coming from 2-0 down to draw equal through an excellent back-heel in the latter stages of the game, only for Croydon to dig even deeper at the end to snatch a 3-2 victory and remain top.

The final was to be played between Croydon Girls and Central Foundation Girls 1, a repeat of the fixture that had brought the girls from Croydon a 7-1 victory in the opening set of matches.  However two solid fixtures in their remaining games had given the Central girls a huge boost of confidence and the final was a much tighter affair.  The day was to belong to the Croydon Girls team however, and they ran out 3-0 winners overall, showing their energy at the end with a flourish of late goals.  Their play was particularly impressive as they had only 4 players throughout due to a late sickness to one player, and they proved that their speed and ability to strike from all areas was deadly.

The trophy won, a presentation ceremony was set-up post match to award all participants with medals.  Croydon accepted their Winners trophy to applause from their rivals, and alongside this, courtesy of Charlton Athletic Race Equality (CARE) Partnership, received 10 tickets to the upcoming Charlton Athletic  vs Colchester match.  It was a clean sweep for the team as it was Catherine Campbell who took home player of the tournament also, scoring in each of their games and helping her team to victory.  After a successful morning, the BFA will be hoping to run further tournaments in the future and will be looking to increase the number of girls getting involved in 5-a-side football.