The thrashing of E7 FC (9-1) and the stall mate against a regressive kick-and-run team Shadwell FC (2-2) played no part in the tactical setup against Stepney FC. It was more of a finely grazed line up to counter play the bubbling ground at Weavers Field.

Stepney FC are one of the teams that hold the ball up well and play with great fluency but Bromley by Bow FC pressed off in great style and pressured Stepney into an error as there Keeper and defenders lapsed into each other as Bahar Ali dinked the ball into the net after 5 minutes. Bromley’s lead was short lived as Stepney used the width of the pitch to stretch Bromley’s defence and capitalise from a corner which saw them head in an equaliser after 10 minutes.

Both teams struggled to keep possession of the ball in the first 20 minutes but Bromley started to set the pace and flow of the game after Oli and Dipon started to emulate the passing game that has become a benchmark for their title aspirations. Bahar had a few chances inside the box before the end of the first half as Fabio and Abdul Muqith played through a few Pirlo-esque passes that was signed off by Abdul Hamid striking the woodwork.

Bahar held the ball well upfront and was stretching the Stepney defence to create chances unlike the last game where he took a few knocks from the chest-beating thuggish defenders of Shadwell FC who used their strong arm tactics to gain even the slightest advantage over the little man. Bromley had majority of the possession in the second half and that paid dividend when they led once again as Bahar slotted from close range after Fabio floated the ball from the left side leaving two Stepney defenders amongst the rustling Oak leaves and the Winter mist.

Bromley defended well in the last 10 minutes with Goalkeeper Amin Ali making two delightful save’s tipping over a goal bound shot that was swerving fearlessly and another when he shuffled across goal to make a bottom corner save.

Sussex’s Open Range Sheep Herder Champion & Goal Keeping Coach, Tuhin Miah Commented “We rounded up the game by showing great possession football and discipline even after losing the lead so quickly. The players showed character holding on to the ball even in the latter stages when the fitness was lacking but we did allow them through the gate a few times to create chances that they didn’t deserve. Once settled our midfield distributed superbly and had created a hatful of chances that we should of buried.” 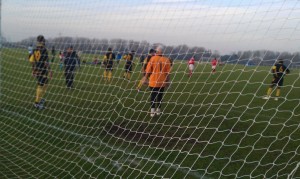 VOTE BBBCO TO WIN A MINIBUS