Bromley Juniors bounce back to show E7 the Exit…

It was all doom and gloom for out of form Bromley by Bow Juniors after the referee controversially awarded E7 an early penalty following a foul by skipper Mumunur Chowdhury that was clearly made outside the penalty box but the referee decided otherwise.

Neither team was able to settle into the game with both teams cancelling each other out. E7 were on the counter attack a few times but the Kwesi Delap’s Offside trap reeled in any threat. Just before the end of the first half against the run of play a 35 Yard belter from Daishaun made it 1-1 with a powerful drive into the top corner.

Bromley Juniors came out strong in the second half as their dazzling skills earned them a penalty which was converted on the rebound by Mukthar Ali. E7 posed no threat to the Bromley tactics and footballing display as they chipped into a 3-1 lead with Wayne putting the ball over the E7 Keeper after a great through ball by Fabio. Celebrations were reminiscent of the famous Cantona goal in 1996.

Super Sub Shakil scored with his first touch to seal the deal in the final 10 minutes as he nutmegged the keeper from a few yards to make it 4-1. Shakil already in the Bromley By Bow Hall of fame and also known as “One Sock Shak” to local residents.

A last minute surge from E7 headed in a consolation goal but it was too late as Bromley Juniors celebrated their win as the Premier League Leaders faced an early cup exit.

Stand in Manager & LBTH Conker Champion, Mamun Chowdhury Commented “The first few minutes we were hanging on a thread but the young players showed great character and worked hard for each other to keep possession of the ball after being 1-0 down. We could of caved in, as you get a lot of controversy in games like this but credit to the players and hopefully we can take this into our league games.” 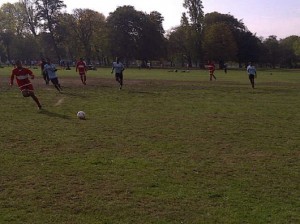