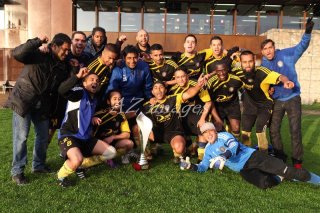 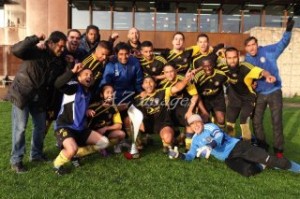 From the picturesque turf and sofa seats at Leyton Orient to the slick and semi ploughed grass pitch at the Hackney Marsh Pavilion was the rescheduled Champions Cup Final 2012.

Bromley by Bow FC kicked off in fine attitude as Olie and Lee held a string of passes in the middle of the park to unleash William on a mesmerising run down the left flank to the edge of the box were he fired home the ball to the roof of the net in the first 5 minutes. He celebrated in a Balloteli Statuesque style. AC Manor Park did not wait around to restart the game and were testing the slick surface by threading the ball to their front men, who made Drogba-esque turns on Bromley defenders who handled him well. A few scrappy shots re-sprayed the turf but did not trouble the keeper.

Bahar had a hatful of chances against the AC Manor Keeper as Beggs played a few weighted passes to his left peg but his misses from open play tallies him level with one Emile Heskey during the EPL 2008 Season.

Dipon and Sadik slid in a few crucial tackles to intercept the AC Manor break through while Sid and Lee chased the loose balls and restored it into normal play. Sid had an outstanding game and worked his sock off, his unique balance and weaving skills surely replaced the holes in the socks. It was from a set piece outside the box that Bromley got there 2nd and rising high was Defender Imrul Gazi who got a head on it. Some say he is reminiscent of the legendary Gurrah Bhai but yet remains a dark horse to any opposition. He celebrated with some relief and a payback expression to manager Shof after missing a penalty during the weekend BFA League game against Shadwell FC.  The comfortable lead was short lived as AC Manor got a scrappy goal from a corner that gave hope before half time which ended 2-1 to Bromley by Bow FC.

The Second Half saw subs Abdal, Fabio and Justin come on periodically to add pace to Bromley’s Midfield and front men as there were chances at both ends to be counted for and against. The game saw periods of individual flare and skill from both teams but it was the Brazilian William who tucked in the 3rd goal and his 2nd as he took on the defenders with a fainted drop of his shoulder to side foot the ball into the net.

The sidelined fans and the distant Hackney Marsh Cafe followers echoed there joy and anthems. They were also joined by the loving Family and friends of Kelvin Brown who also came down to show their support.

But with 10 mins left it was the sheer power of the Manor striker that turned and drilled a slick shot into the bottom corner leaving the Keeper for deadwood. The score was 3-2, but Bromley took the pressure off using the width of the pitch and to the sweet sound of the final whistle as they were crowned Champion’s Cup Winners of a competitive two league competition. Final Score 3-2 to Bromley by Bow FC.

Goal Keeping Guru and Arm Chair Pundit, Mo Miah tweeted @bbbfc “The on/off weather made it difficult for both teams to play to the style that suited them but at times there were more moments of magic than a tin of Quality Street that saw the technical skills of individual players shine through on a damp day, With the slick surface, we still held onto a great deal of possession but this didn’t reflect the end product needed to win comfortably nevertheless it’s a massive piece of silverware and a stamp on my Nando’s Card for the celebratory meal” #WeAreTheChampions #GameWasDench